I buried my father in a quickly chosen plot, an offhand choice of casket, in the cemetery

closest to my house. My mother's mind has holes in it, she has no idea where her husband

is. No one will visit him, but me. I go up to see him (odd choice of words), to plant "forget me

nots," which quickly dry in the hot east bay hills. One day, I momentarily could not find his

grave, it looked different. Someone had placed flowers in the vase attached to the headstone.

hate plastic flowers. I looked around me, there was a multitude of brightly colored tributes, in

another cemetery. This one had a large sign with rules and regulations regarding "gravesite

adornment." No flags or pinwheels here. But, in their place, an odd assortment of gifts,

simple and poignant. Private tokens that spoke quietly to no one, but held meaning,

nevertheless. Some older graves had fallen into disrepair. No gifts for them, but also, no

grass; headstones broken and thrown about, as if the spirits inside grew restless with their

inactivity and churned up their earth. What happened to these families? I asked around.

Many people i talked to did not know where their ancestors were buried, as closely related

as grandparents. No one to bring plastic flowers, even if they could. This seemed even more

curious, as I come across whole hills devoted to one family. The patriarch's monument, huge

and phallic planted at the apex. Around him, those he married, bred, bullied and apparently

kept in good stead. What happens to the black sheep in these families? Do they get a place

of honor at the "master's" feet, or are they unceremoniously planted down the hill with "the

others"? What if, heaven forbid, they don't want a marble gravestone like their siblings, don't

want to worship at the alter, but would rather be cast upon the oceans. Do they become

erased from the family tree due to lack of headstone? Odd, practice, this burial tradition.

Families gather at open holes, looking down at wet earth teaming with crawling things that

prefer the dark. "We're going to put dad in where?" Kids run around, preferring not to think

about that, just enjoying a day off from school. What a picture perfect day, just like a

postcard. He would have loved it here. "Shhhh, you're loud enough to wake the dead. Come

say goodbye. To who? Drop some dirt, help cover him up. There, that life is done, throw in 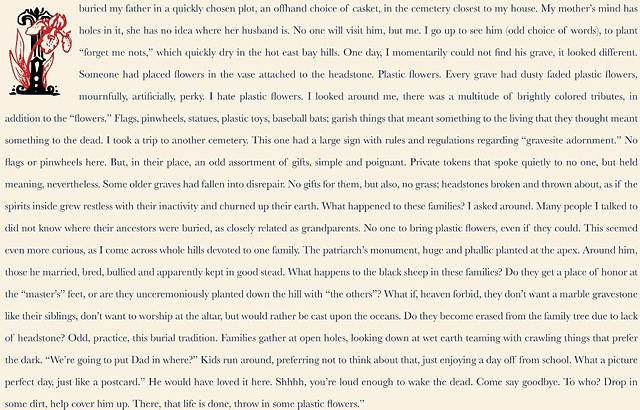